Here are my two striped cats – Obi and Yoda.  I adopted these very special tabby cats within six months of each other, around fourteen years ago when I worked as a vet at the RSPCA.

Yoda was my baby before my human babies arrived.  He was brought in to the RSPCA clinic by a young girl who’d found him at school – a helpless one-week-old kitten who’d barely opened his eyes.  I declared I would take him home to hand-rear, then transfer him to the RSPCA shelter to find a new home once he didn’t need a ‘mother’.  Mmmm…I obviously didn’t think that plan through!  Although I became his surrogate mum, unlike cat mothers I was unable to release my kitten into the big wide world.  He was given the name ‘Yoda’ for a pair of ears that were rather disproportionate to his body.  As he grew he stayed true to his name and remained little. Even when he reached his senior status as a cat, to me he was still very much a kitten – small, with kitten-like behaviour and dependency.

Yoda became notorious amongst our friends and family who came to visit, for his antagonistic antics towards guests…yet at home with his family (especially his ‘mother’) he was a loving teddy-bear!  When my daughter and later my son were born however, he became equally bonded to them as he was to me.  He also had some rather curious characteristics, including having a fondness for handbags and shoes (no, he didn’t wear them but loved to rub himself on any that had just entered the house) and an absolute infatuation with capsicum and tomato, which I discovered after I’d left my vegie garden harvest out on the kitchen bench one night, only to find some of it missing the following morning.

Yoda passed away tragically in 2012, at the age of eleven.  It was a huge shock as I always felt he would live to a grand old age – maybe even break a world record for being the oldest cat ever!  It was a blatant reminder to me of how precious life is…that it can be taken away in an instant with no forewarning.  Yoda will have a place in my heart forever…the ‘Peter Pan of the Cat World’, as my sister succinctly described him…’the little lost boy who never grew up’.

Obi joined our family six months after Yoda.  At the time he was a young, extremely dishevelled but ever-so-sweet stray tomcat who was recovering from a case of acute kidney failure, having been brought-in to the RSPCA clinic by animal ambulance.  We suspected a toxin had caused his kidney failure. (By the way, that doesn’t mean he was ‘baited’ –  a chomp on a lily or a lick of some radiator fluid would have been enough; both are very toxic to cat kidneys and are attractive to cats).  He was hospitalised in the clinic and by three weeks had made a good recovery as well as charming everyone around him.

Although he recovered well, we couldn’t be certain Obi’s kidneys didn’t undergo permanent damage that might cause him problems in the future, so we were reluctant to put him up for adoption in the shelter.  That’s when I was coaxed in to providing him with a loving home… I’d taken-in another tabby cat six months earlier, and he clearly needed a friend.  It took a while for Obi to warm to his new residence and family but after spending quite a bit of time under the bed he came to realise that this was a pretty favourable situation and relaxed. 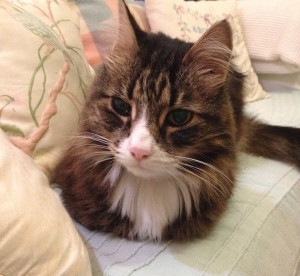 Obi is an all-round cool cat.  He loves hanging out with people (although he still has a funny habit of hiding under the bed when a stranger arrives in our house – probably quite a smart tactic for a cat).  He just adores a cuddle and a pat – he’s one of those rare cats with the canine trait of going into a trance when his tummy is massaged.  He’s rather good at cat games and knows how to catch a mouse – well, he’s only had the opportunity once, being an indoor cat (I LOVE cats but I HATE that they kill wildlife)…a brave antechinus (not a mouse) ventured into our house and met Obi…fortunately I managed to rescue the antechinus and it survived…PHEW!  He can stand-up to a large dog like he’s a lion…yet cuddle up with his BDF (Best Dog Friend) to inflict a thorough face and ear washing.  And he’s exceptionally clever – the only cat to find his way into the ceiling space of the vet clinic where I previously worked…and into the cupboards in the surgery!

Be. Low impact. No nonsense.

Resources for the Backyard Chicken Keeper

Choosing to reuse since 1975

The Oatmeal - Comics by Matthew Inman

Knitting, Crochet and Sewing for Beginners

eat up some crafty goodness with this creative mama

For the Knit of It